How engineers from asset management improved the reliability of a power transformer. 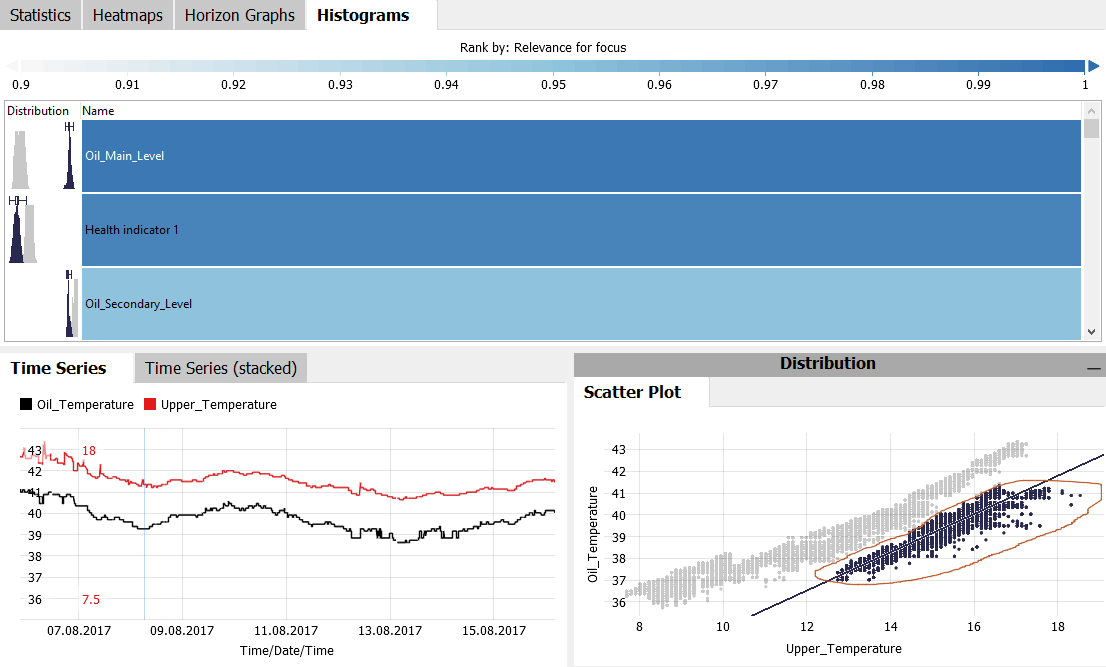 Visplore is recognised and in use as a central strategic software for data analytics throughout the company. – Coordinator of Renewable Energy Data, Transmission System Operator

Asset managers of a transmission provider company were forced to shut down a power transformer after an ongoing malfunction. The severity of the incident posed a significant threat to the transformer’s health, and thus, its expected remaining lifetime. Replacement costs for such assets are enormous. Thus, the asset managers had to find out the reasons of failure, and how to avoid them in the future.

From on-site inspections, hypotheses could be formed, but the actual causes were not clear. Thankfully, numerous sensors had been installed, recording the operating conditions in high resolution. The asset managers were hoping the data would tell them more, but they had no means to analyze it effectively.

The asset managers had access to the transformer’s sensor time series, as well as recordings of control parameters of the operation. A key goal was to understand during which operating conditions the transformer’s health had suffered the most. Ideally, learnings could be transferred to other similar transformers as well.

Their idea was to compare the period right before the incident with periods of regular operation for all the available time series. Moreover, the experts assumed that derived metrics and features would need to be extracted from the raw values to fully understand the problem. With their existing tools, they did not feel equipped well for this type of advanced root-cause analysis.

The asset managers decided to use Visplore for investigating the data. Its standard tools for viewing trends and correlations in the time series quickly enabled them to check their initial hypotheses. Moreover, Visplore’s integrated functionality for comparing time periods revealed sensors that were significantly different during the malfunction compared to the periods of regular operation.

As suspected, the root-cause was not easy to explain from the raw observations alone. It was necessary to compute additional derived indicators using time-shifts, derivatives, moving averages, and other custom calculations. Visplore’s integrated formula editor supported performing these calculations effectively. From hundreds of computed indicators, Visplore automatically presented the asset managers the most relevant ones for explaining the malfunction.

Result: Insights to operate the critical power transformer up to 8 years longer

Visplore enabled the asset managers to perform a data-based root-cause analysis for the first time by themselves. Particularly harmful operating conditions were identified, and useful indicators were established that would allow them to monitor the asset’s health more effectively in the future.

In addition, they gained a better understanding by validating or falsifying their hypotheses for a better operation of their assets in general. Overall, managing the complex task of troubleshooting the transformer prolonged the life expectancy of the transformer by around 5 to 8 years with a positive impact on other assets as well.

Read more about how Visplore transforms …

Energy and Utilities
Scroll to top